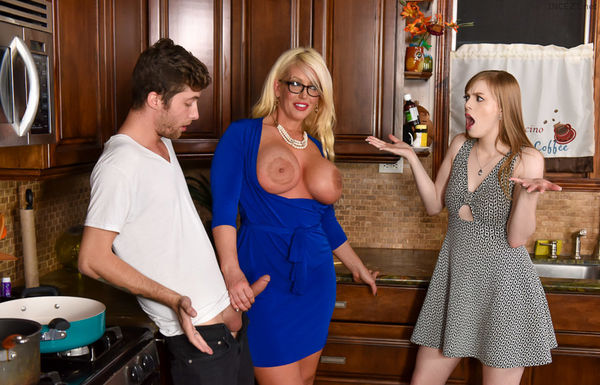 Dolly Leigh partied too hard and her boyfriend had to carry her home. Dolly’s stepmom, Alura Jenson notices what a nice young man her step daughter’s boyfriend is and suggestively tells him that he should be thanked for being so considerate. They converse, but stepmom was already fixing to to her knees and suck her step daughter’s boyfriend off. While stepdaughter is passed out on the bed, stepmom and her daughter’s boyfriend play. There is no substitute for experience, especially when it comes to sucking younger cock. This begins a series of sucking, fucking, and handjobs over the next few days. All of it happens behind her daughter’s back. This younger man can’t help it. Afterall, stepmom has giant tits and is just so dirty. Then one day in the kitchen, stepmom is on her knees with her giant jugs hanging out and sucking her daughter’s boyfriend’s cock when her step daughter walks in. Dolly is not happy her mom and boyfriend are fucking behind her back. Her stepmom gives her great advice saying to quit acting like your mother and come here. Stepmom makes Dolly join in the action right on top of the granite breakfast bar. Both of them get drilled all over the kitchen while sharing the lucky boyfriend’s cock. Finally, you see Dolly actually getting out of the hot prude girl act and into hot slut mode. She is a sight to behold while getting fucked with her stepmom. This culminates with both of them sucking him off and splitting his cumshot. Both of them are wiping jizz off their faces and chins and licking it off their fingers. The boyfriend hopes this will be a regular thing going forward, and so do we! 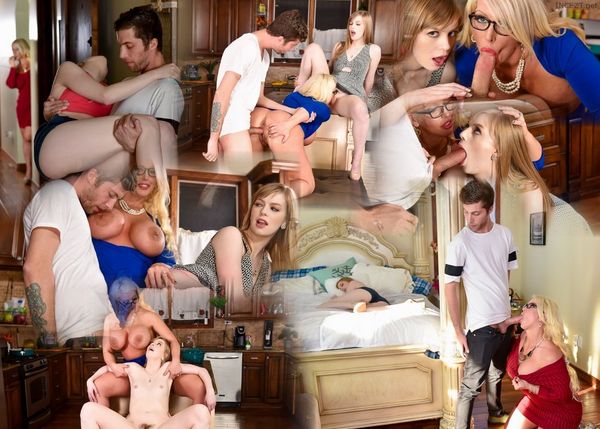